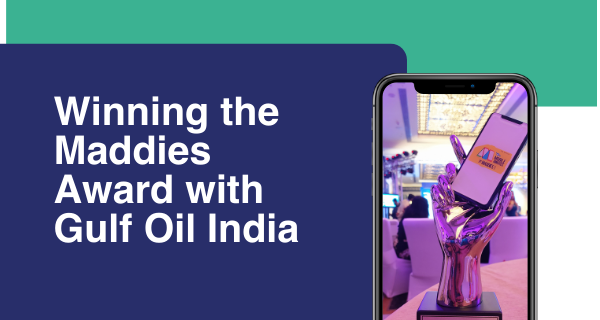 The manufacturing sector deals with an unspoken distribution network. They are the influencers who sell a product at the point-of-sale. Just like end customers, influencers contribute to the final sale in different ways. They are as unique as customers and need to be leveraged as per their level of engagement and contribution.

Awarded Category: Best use of App for Marketing

In the manufacturing and distribution sector, influencers tie back to those such as mechanics, electricians, plumbers, carpenters, painters, and many other independent workers.

Gulf Oil India deployed FirstHive to create a differentiated experience and motivate them to drive more conversions at the point-of-sale. They opened up this approach to non-validated mechanics who never engaged with the brand earlier. This enabled them to expand their distribution network among influencers such as mechanics.

Gulf Oil India also enabled the digitized campaign module to partner with Zomato and engage their drivers with exclusive discounts.

FirstHive’s Loyalty module was deployed for Gulf Oil and the platform was named as Gulf Master Scan. All input source channels were connected to FirstHive like Website, Mobile App, CRM, Customer Care, SMS &; Whatsapp and with these FirstHive started creating identities at interaction level, channel level and at an enterprise level. Various stages like Acquisition, Engagement, Gratification and Redemption were automated and weaved in seamless manner.
Gulf Master Mechanic Loyalty Program, the flagship program of Gulf Oil India was launched in 2018. Within a span of 30 months, Gulf Oil acquired a user base of 1.4 lac mechanics, of which 50,000 are active on a monthly basis.

This groundbreaking success drove Gulf Oil to extend this program to Aggregators and open market in the mid 2019 wherein they were renamed as ‘Gulf Master Scan’.

With Gulf Master Scan, anyone today can download the app from Google Play Store, self-register, scan the smart code and earn the reward value. The edge that this technology brings in is that the program will identify the user basis the deterministic parameter i.e; Mobile number and personalize the experience accordingly. Single app, single code, and a personalized experience!!

Why every business needs a good CDP?

Why have CDPs caught the fancy of Indian Mutual…

Unmasking differences between a Marketing Automation tool and a…